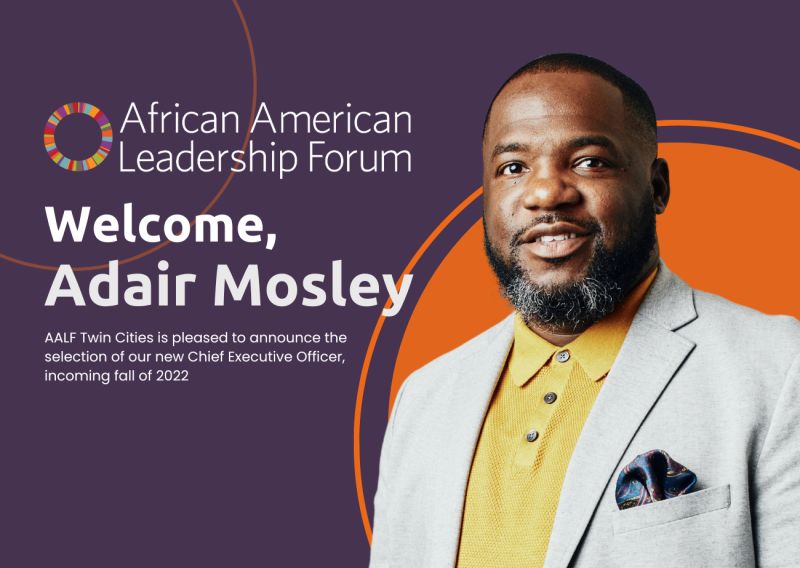 Mosley has a track record of strong leadership, transformative innovation and fundraising. He has been with Pillsbury United Communities for 11 years, the last five as CEO. Throughout his tenure, the agency’s budget has grown from $12 million to $16 million.

“I am deeply honored to be chosen as the next CEO of the African American Leadership Forum to continue my ambition of driving transformative impact across our state. I believe in the collective power of the Black community and all the potential we hold,” said Mosley. “I look forward to leading fearlessly, unapologetically, and authentically to meet this moment.”

Earlier this year, Mosley received national headlines for raising $1 million to provide every student of North High School’s graduating class of 2022 a post-secondary scholarship. He also served instrumental in opening North Market, a full-service grocery store in North Minneapolis. His hiring culminates a five-month national search to find the successor to Owens. During that time, Vice President of Administration Shanaya Dungey, and Vice President of Amplification Marc Watts, have served as AALF’s Co-Interim CEOs.

“The work we are doing is a critical component of moving the needle and making a broad impact for Black lives in our region. We are visioning and stewarding a new Black experience for our community. Adair’s innovative leadership approach and trailblazing efforts will prove invaluable for AALF to take our current initiatives to the next level,” said Dungey.

“This moment in the Twin Cities provides us with a unique opportunity to create a healthy, vibrant, and prosperous future for the African American community,” said Kevin Lindsey, Chair of AALF’s Board of Directors. “In pairing the talented AALF staff with Adair’s leadership to cultivate the best ideas within our community, AALF is poised to succeed and become a model for metropolitan areas in the United States to emulate.”

Prior to being named Pillsbury United’s CEO in 2017, Mosley led as the organization’s Chief Innovation Officer. He is a sought-after public speaker on topics ranging from health equity to disruptive system design and serves on the boards of MinnPost, the Center for Economic Inclusion, and the Women’s Foundation of Minnesota.

In 2019, Mosley was selected to represent the Twin Cities region at Harvard Business School’s Young American Leaders Program. He has been named by the Grist organization as one of its 50 Fixers—”individuals cooking up the boldest solutions to humanity’s biggest challenges”–and received the Local Legend Award from the General Mills Foundation for the embodiment of Dr. Martin Luther King Jr.’s vision and legacy.

Founded in 2006, AALF is regarded as one of the leading Black-led nonprofits in the United States. In 2021 the organization was selected to be the primary steward for United By Black Powered By All, a bold 10-year funding and community solutions initiative designed to close the gaps of racial disparities in Minnesota. Known for its connections to community, leadership development and ability to mobilize its network, AALF’s mission is to improve the lives of African Americans in Minnesota by building a cross-sector network of leaders and institutions that convenes, collaborates, and champions solutions. AALF carries out its work through its proprietary methodology known as Black-Centered Design. More information is available at www.aalftc.org. Contact at info@aalftc.org.