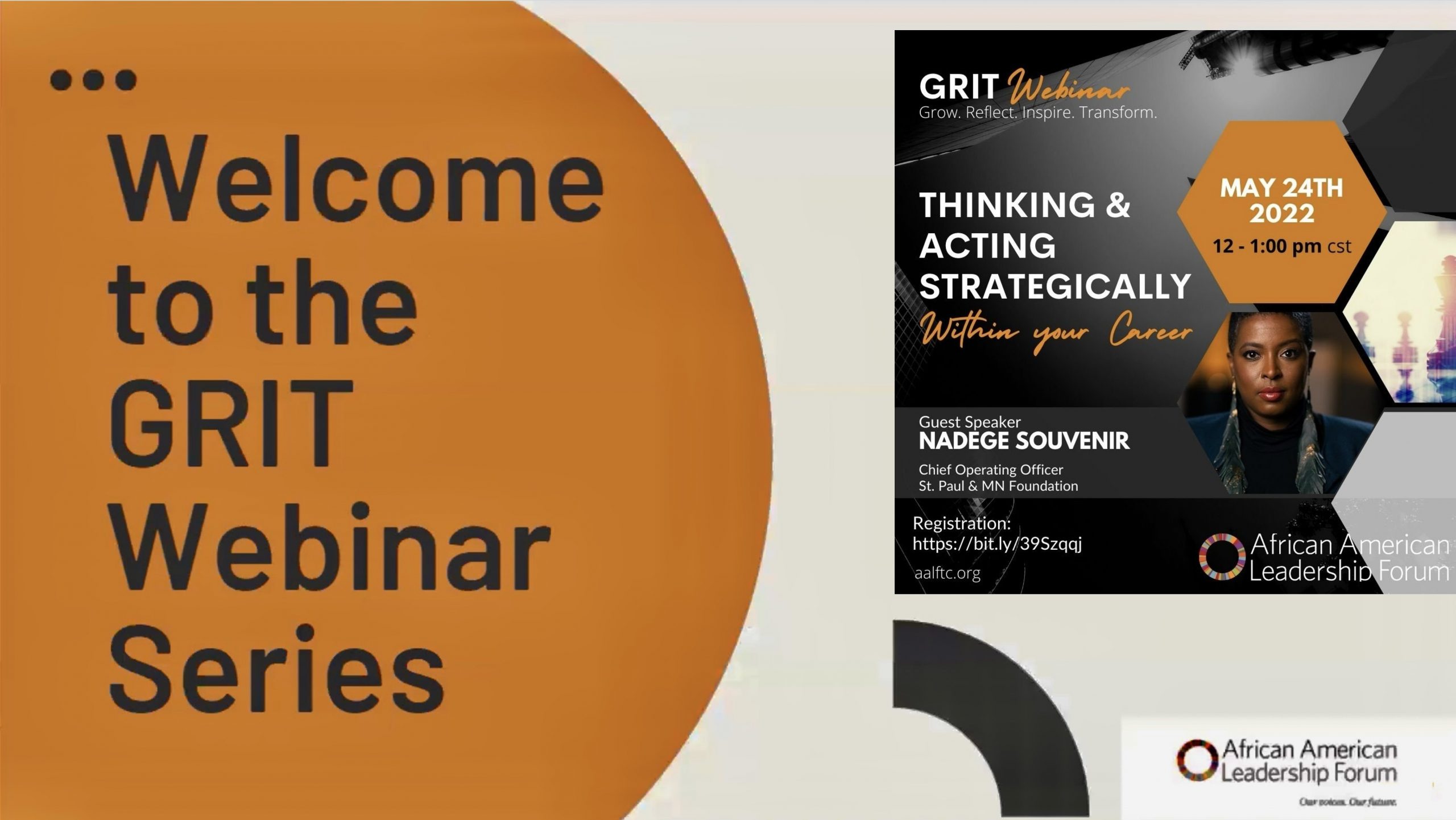 [MINNEAPOLIS – May 25, 2022] –Nadege Souvenir, Chief Operations Officer at the St. Paul and Minnesota Foundation, was the featured speaker for the first of AALF’s six-part GRIT webinar series, designed to help leaders grow, reflect, inspire and transform.

Nadege, a former lawyer who left her law firm just as she was about to make partner, looks back with no regrets while turning her challenges into career stepping stones. In her presentation titled: Thinking and Acting Strategically Within Your Career.” Nadege, now recognized as a courageous and powerhouse leader in the nonprofit sector, discussed the importance of taking risks and owning one’s personal narrative.

“The most critical component is knowing and owning who you are. It is what has helped me be most successful in my career.”

Nadege advised attendees to refuse to play small and push back against sexist or racist labels like “angry Black woman.”

“A lot of times we give power to narratives that don’t serve us, narratives we overplay to our own detriment,” she said. In today’s job market in which reputation can often precede a candidate based on what’s written on the internet, it’s necessary at times to implement “course correction,“ said Nadege, especially when the existing narrative is not accurate, is negative or under-represents one’s true credentials.

Those ‘in the room’ engaged with Nadege as she conducted a live poll, asking how frequently they’ve updated their resumé. “One piece of paper cannot capture the whole of who you are,“ she said. “I recommend you have multiple resumés. I tailor my resumé so that it matches the narrative that the employer has given in the job description.”

In addition to regularly updating their resumes, Nadege also encouraged attendees to inject authenticity into their elevator speech and social media profiles. For example, as COO of one of the state’s leading foundations, Nadege is also a breast cancer survivor who underwent a double mastectomy. She stated her cancer journey is central to her narrative, and makes no apologies for sharing details of her reconstructive surgery.

“If you follow me on Instagram [@nadegejoseph] you will know too much about me. But I think that is important because I have now recognized that it is a part of my narrative that needs to show up about me in all spaces.” 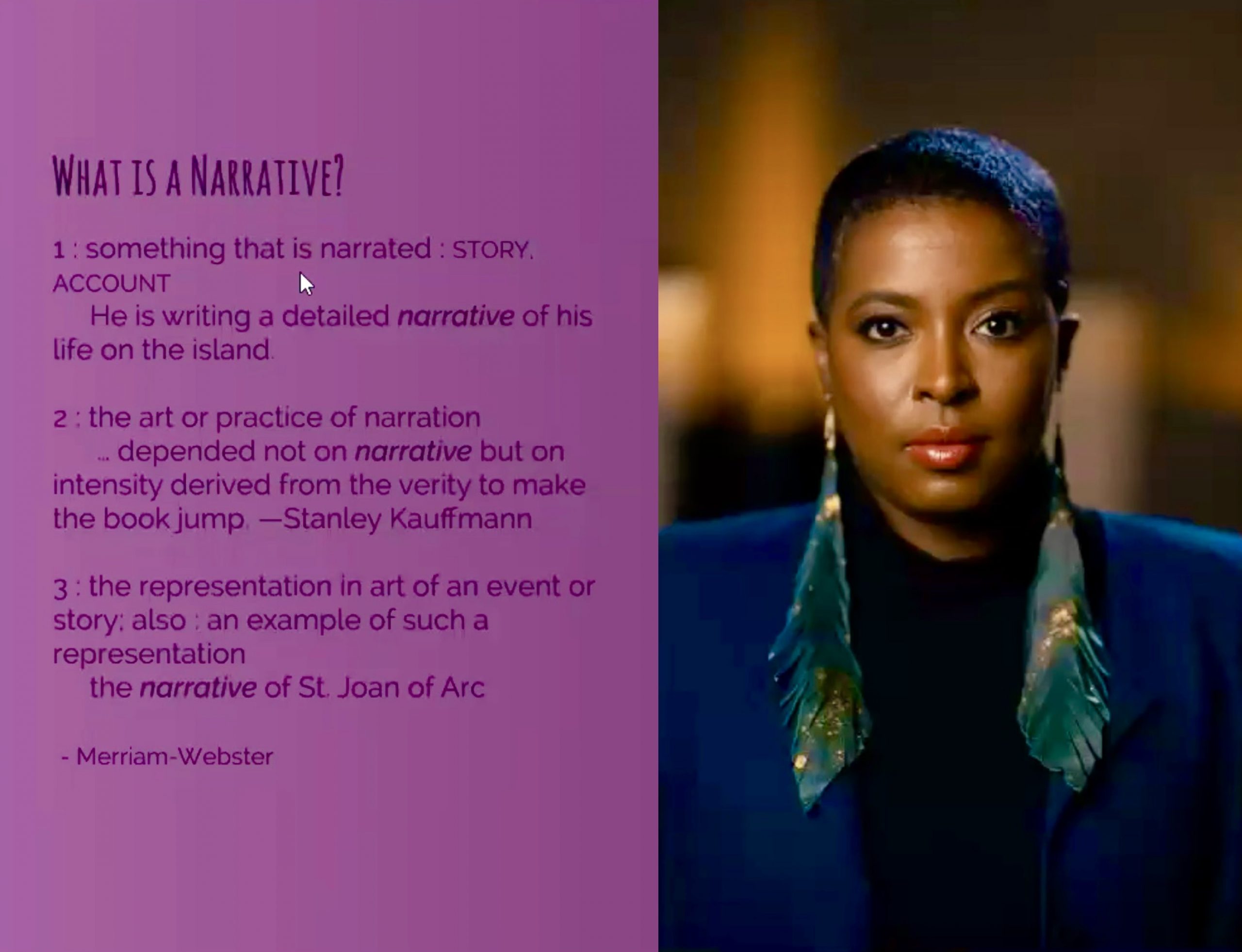 Nadege focused on your “Narrative, Now & Next.” 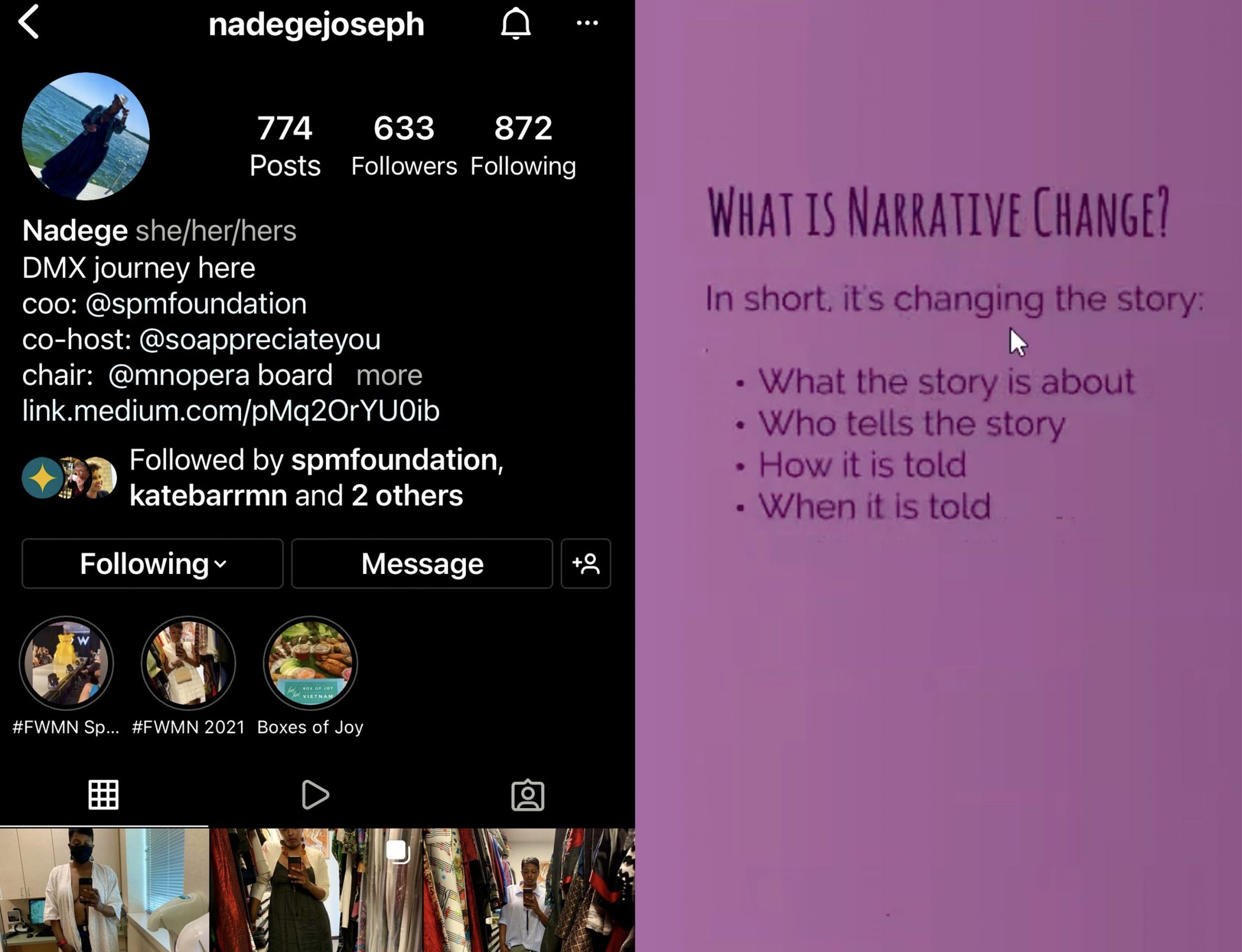 Nadege Pointed Out Her Own Instagram Page As To How She Has Changed Her Narrative.

Attendees participated in a lively chat discussion, including the following comments:

“Thanks for sharing your insights Nadege!” exclaimed Wokie Freeman-Ghogba.

“Yes, preach! Yes, I can relate to trying to be “twice as good.” Isn’t that true we work so hard,” posted Susan Allen.

Many thanks again to Nadege Souvenir for launching AALF’s  leadership series with an impactful and engaging presentation. If you’d like to view Nadege’s presentation you can do so by watching the video below.

CONTACT: For media inquiries or to learn more: aalftc.org and info@aalftc.org